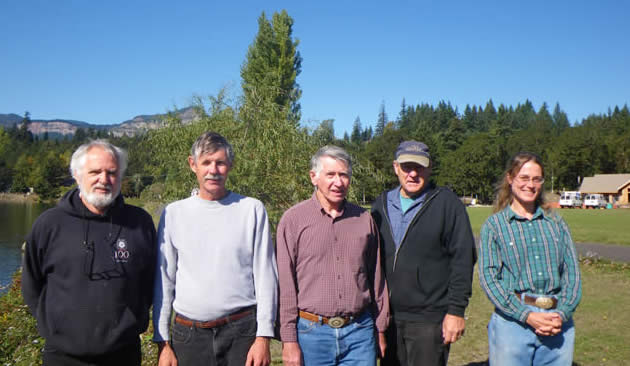 The Skamania County Noxious Weed Control Program receives its oversight from a dedicated volunteer board, with members representing each zone within the county.

Sally began her service to the county weed board because she realized that invasive species are one of the greatest environmental threats to the West today. She is also a member of the Friends of the White Salmon River Board, The Backcountry Horsemen of Oregon: Columbia Gorge Chapter, as well as a member of the Gorge Grown Network. Sally's current appointment will end March 31, 2023.

Steve has resided in the Columbia River Gorge since 1984. He retired from the Longview Fiber Company in 2007, where he worked since 1974 managing approximately 20,000 acres of land in Skamania County. Steve's current appointment will end March 31, 2021.

Ken began his service to the weed board in November of 2006. He resides in North Bonneville with his wife Mary Ann. He is currently enjoying retirement from a teaching career of 31 years, 27 with the Stevenson-Carson School District. Ken's current appointment will end March 31, 2021.

Ken began his service to Skamania County in 1988. He is retired from the US Department of Interior where he served as a Natural Resource Manager. He is actively farming holly, and among his many other affiliations, he represents the Southwest Washington Counties on the Washington State Noxious Weed Board. Ken's current county weed board appointment will end March 31, 2023.

Larry has served many distinguished years on the weed board. He is a joyously retired mill worker who raises cattle. Larry's current term will end March 31, 2023.